Progress is often best appreciated in retrospect. It is often the case that a steady stream of incremental improvements over a long period of time ultimately adds up to a significant level of change. Today, ten years after we first launched the Provisioned IOPS feature for Amazon Elastic Block Store (EBS), I strongly believe that to be the case.

All About the IOPS
Let’s start with a quick review of IOPS, which is short for Input/Output Operations per Second. This is a number which is commonly used to characterize the performance of a storage device, and higher numbers mean better performance. In many cases, applications that generate high IOPS values will use threads, asynchronous I/O operations, and/or other forms of parallelism.

The Road to Provisioned IOPS
When we launched Amazon Elastic Compute Cloud (Amazon EC2) back in 2006 (Amazon EC2 Beta), the m1.small instances had a now-paltry 160 GiB of local disk storage. This storage had the same lifetime as the instance, and disappeared if the instance crashed or was terminated. In the run-up to the beta, potential customers told us that they could build applications even without persistent storage. During the two years between the EC2 beta and the 2008 launch of Amazon EBS, those customers were able to gain valuable experience with EC2 and to deploy powerful, scalable applications. As a reference point, these early volumes were able to deliver an average of about 100 IOPS, with bursting beyond that on a best-effort basis.

Evolution of Provisioned IOPS
As our early customers gained experience with EC2 and EBS, they asked us for more I/O performance and more flexibility. In my 2012 post (Fast Forward – Provisioned IOPS for EBS Volumes), I first told you about the then-new Provisioned IOPS (PIOPS) volumes and also introduced the concept of EBS-Optimized instances. These new volumes found a ready audience and enabled even more types of applications.

Over the years, as our customer base has become increasingly diverse, we have added new features and volume types to EBS, while also pushing forward on performance, durability, and availability. Here’s a family tree to help put some of this into context: 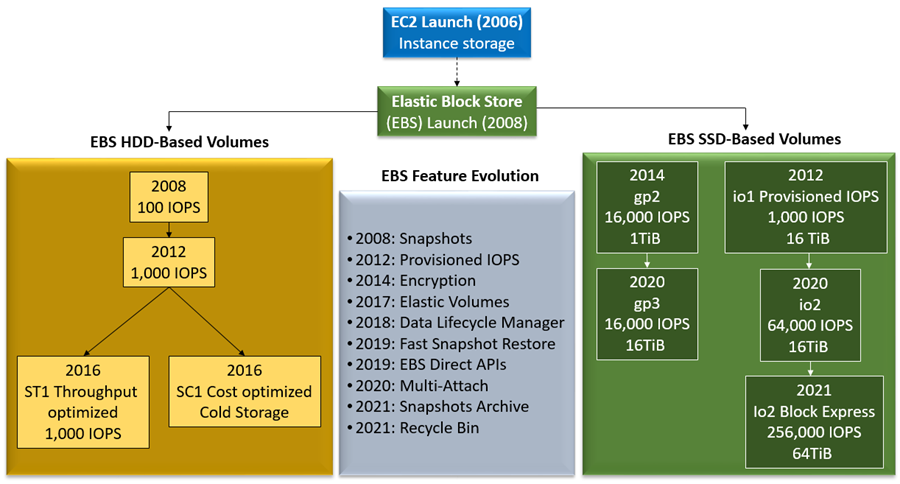 Today, EBS handles trillions of input/output operations daily, and supports seven distinct volume types each with a specific set of performance characteristics, maximum volume sizes, use cases, and prices. From that 2012 starting point where a single PIOPS volume could deliver up to 1000 IOPS, today’s high-end io2 Block Express volumes can deliver up to 256,000 IOPS.

Inside io2 Block Express
Let’s dive in a bit and take a closer look at io2 Block Express. These volumes make use of multiple Nitro System components including AWS Nitro SSD storage and the Nitro Card for EBS. The io2 Block Express volumes can be as large as 64 TiB, and can deliver up to 256,000 IOPS with 99.999% durability and up to 4,000 MiB/s of throughput. This performance makes them suitable for the most demanding mission-critical workloads, those that require sustained high performance and sub-millisecond latency. On the network side, the io2 Block Express volumes make use of a Scalable Reliable Datagram (SRD) protocol that is designed to deliver consistent high performance on complex, multipath networks (read A Cloud-Optimized Transport Protocol for Elastic and Scalable HPC to learn a lot more). You can use these volumes with X2idn, X2iedn, R5b, and C7g instances today, with support for additional instance types in the works.

Your Turn
Here are some resources to help you to learn more about EBS and Provisioned IOPS:

I can’t wait to see what the second decade holds for EBS and Provisioned IOPS!