Last year at AWS re:Invent 2021, we introduced the preview of AWS IoT TwinMaker, a new AWS IoT service that makes it faster and easier to create digital twins of real-world systems and use them to monitor and optimize industrial operations.

A digital twin is a living digital representation of an individual physical system that is dynamically updated with data to mimic the true structure, state, and behavior of the physical system in order to drive business outcomes. Digital twins can be applied to a wide variety of use cases spanning the entire lifecycle of a system or asset, such as buildings, factories, industrial equipment, and production lines.

Many of our customers are still early in their digital twins journey. They are working hard to connect their data across disparate sources and be able to contextually visualize that data in a dashboard or an immersive environment in order to unlock their business value and outcomes.

Today at AWS Summit San Francisco, we announce the general availability of AWS IoT TwinMaker with new features, improvements, and the availability in additional AWS Regions. AWS IoT TwinMaker provides the tools to build digital twins using existing data from multiple sources, create virtual representations of any physical environment, and combine existing 3D models with real-world data. With AWS IoT TwinMaker, you can now harness digital twins to create a holistic view of your operations faster and with less effort.

AWS IoT TwinMaker has capabilities for each stage of the digital twin building process: collecting data from diverse data sources using connectors (components), connecting to data where it lives to represent your digital twins, and combining existing 3D visual models with real-world data using a scene composition tool, and building web-based applications using a plug-in for Grafana and Amazon Managed Grafana that you can use to create dashboards. 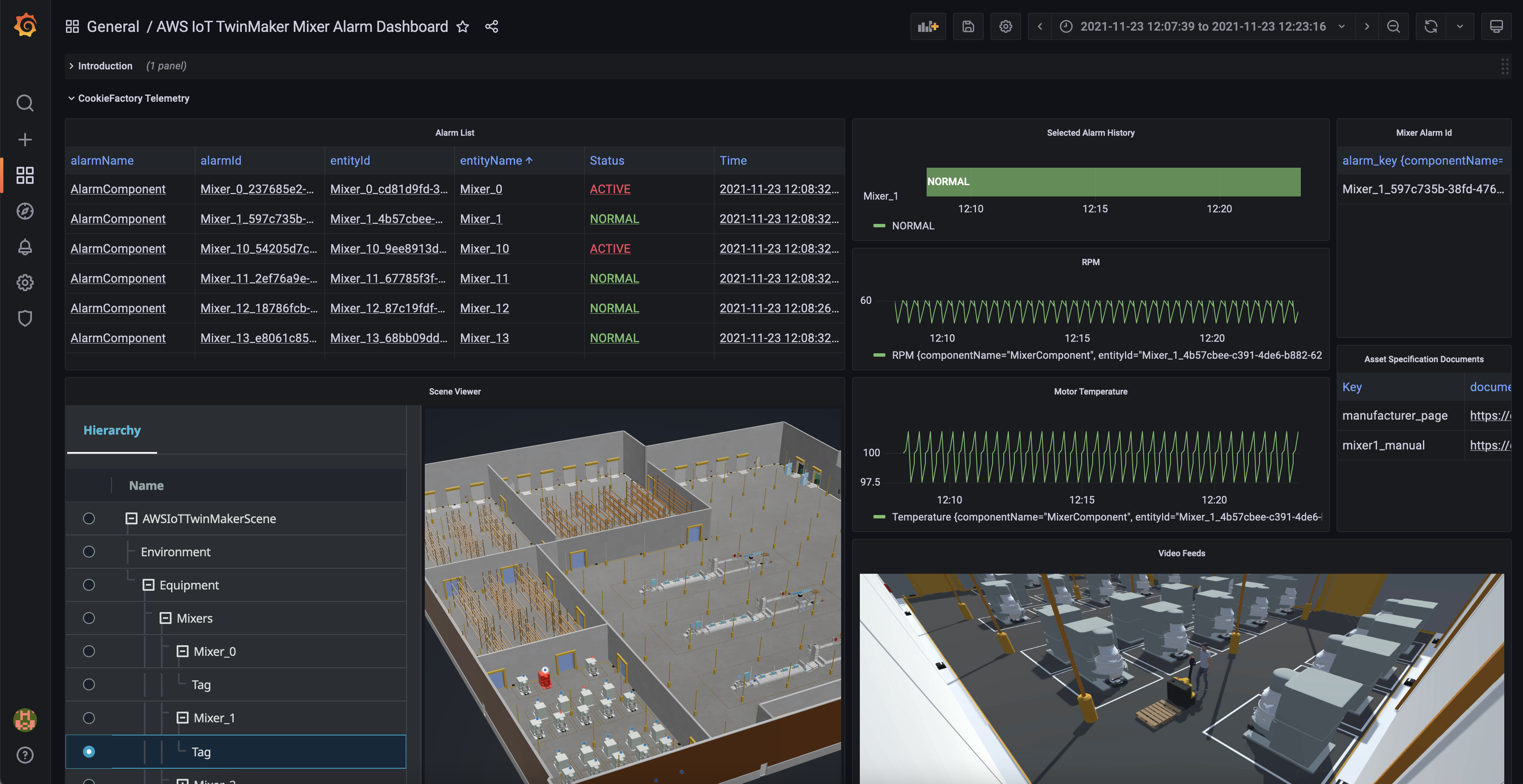 For example, Cognizant’s 1Facility solution uses AWS IoT TwinMaker to help improve the building monitoring experience by reducing the time to troubleshoot a building issue via 3D visualization and aggregating data from multiple sources in a connected building. To learn about more use cases, visit AWS IoT TwinMaker Customers.

New Features at the General Availability Launch
At this launch, we added some new features in AWS IoT TwinMaker:

Motion indicator – In preview, developers choose from two ways to represent data in a 3D scene: 1) tag, which can be used to bind an entity with a property and use simple rules to drive behavior like changing colors in near real time when certain conditions are met, and 2) model shader, used to change the color of the entire entity based on simple rules. Now there is a third option, motion indicator, to depict speed of motion in addition to tags (alerts) and color overlay (changing a model’s color).

There are three kinds of motion indicators for different use cases with different visuals, for example, LinearPlane (for conveyor belt), LinearCylinder (for tube), and CircularCylinder (for mixer). You can configure the motion speed and the background or foreground color of the indicator widget with either static values or with rules that will change according to different data input.

Scene templatization – With this new feature, all the data bindings such as for tags and model shaders are templatized. You can choose a template for the data binding in the console. For example, a tag can bind to each ${entityId}/${componentName}/AlarmStatus. When the operator selects the alarm for Mixer 1, the Mixer 3D Scene shows the information for Mixer 1; if the operator chooses Mixer 2, then the Mixer 3D Scene will show the information for Mixer 2.

More API improvements – We are making continuous improvements to user experience across the service based on usability feedback, including in AWS IoT TwinMaker APIs. Here are some API changes:

More code samples – You can refer to more developer samples to get started with AWS IoT TwinMaker. These code packages, including new data connectors such as Snowflake, are distributed through our GitHub repository for the most common scenarios, with a goal to support and build a community of developers building digital twins with AWS IoT TwinMaker.

As part of the AWS Free Tier, you can use up to 50 million data access API calls for free each month for your first 12 months using AWS. When your free usage expires, or if your application use exceeds the free tier, you simply pay the rates listed on the pricing page. To learn more about AWS IoT TwinMaker, refer to the product page and the documentation.